Unheard, Unseen... by Daniel Lloyd Little is a riveting adventure thriller involving the Royal Canadian Navy submarine HMCS Corner Brook and US Navy SEALs in a dangerous covert operation that could save the world from future nuclear annihilation.

It is 2009 and North Korea has purchased four outdated submarine launched ballistic missile boosters from a French company tasked with destroying the rockets. Because they  are not a weapon in and of themselves, international law governing the sale of strategic weapons can not prevent the acquisition. Both the US and Canadian governments however, know too well what the unstable North Korean leader intends for the

rocket boosters in light of his failure to successfully launch a missile of his own.
When a carefully planned covert mission by US Navy SEALs to intercept the rockets unravels due to mechanical problems with the US Navy ultra quiet spy submarine USS Jimmy Carter, a replacement must be found and quickly! The surprising solution comes in the form of a Canadian submarine.

Commander Michael Simpson, nearing the end of his career with the Royal Canadian navy has few doubts concerning the capabilities of HMCS Corner Brook, and he knows that his crew is the best out there. The only answer to his orders is the same one that has echoed throughout the history of one of the world’s best trained navies; ‘ready, aye ready’. In Unheard Unseen, the author takes the reader on a thrilling adventure as the officers and crew of HMCS Corner Brook and a team of US Navy SEALs undertake a mission fraught with danger! 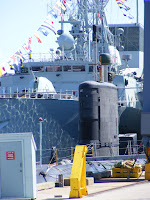 spellbound as the SEALs checked over their equipment and weapons.
“Attention on deck!” Boris jumped up when he spotted Commander Simpson.
“We don’t do that here lieutenant. People keep hitting their heads on things when they stand up too fast.” Mike grinned and extended his hand to Boris.
“Thank you sir. Just being respectful first time meeting you, sir,” Boris returned the smile and introduced Mike to his men.
“Good to have you aboard gentlemen,” Mike announced after greeting each of the men in turn. “I hope you find the accommodations acceptable. If the crew become a bit too nosey, just let me or one of the other officers know and we’ll shoo them out.”
“No, they’re just fine, sir,” said Boris. “We don’t mind educating them about our equipment and getting to know each other, and besides, when we’re out there pounding on the hull to be let back in, we want to think of the whole boat being interested in picking us up,” he finished with a grin.

“Okay lieutenant. But don’t go recruiting any of them. I understand you met one of my petty officers and brought him back to us.”
“Chief Cole? Yes sir. Good man…or snoop as we call him,” Boris laughed, then narrowed his eyes. “Of course the Chief of Naval Operations might not see it that way,” he added.
“Excuse me?” Mike asked, not sure if the lieutenant was joking or not.
“Oh, you’ll have to ask Mr. Cole about that one, sir. I’m not even sure that it’s not ‘need to know’.” The whole team laughed this time and Mike made a note to have a chat with his chief petty officer and find out what he had done. The CNO? Maybe it’s time for young Mr. Cole to join the surface fleet, thought Mike, afraid to even imagine what might have happened.