CONFLICT IN THE NORTH

This time the Soviet Union is threatening Canada's North and NORAD and all that stands before them is a small group of Canadian Rangers, and one regular Canadian Army sergeant.
It is 1966, and the Cold War is hot! The Prime Minister knows that Canadian Sovereignty is only being given lip service by the world’s two Super Powers, but when a team of Soviet Spetsnaz commandos is discovered in Labrador on a mission to disrupt NORAD’s Pinetree Line communications, he realizes he must act swiftly or risk Canada forever becoming a mere puppet on the world stage.

The President of the United States, also aware of the Soviet Spetsnaz incursion and brushing aside Canada’s jurisdiction, orders a US Navy SEAL detachment on a clandestine mission to Labrador with the mandate of eradicating the Spetsnaz intruders and returning without being detected by the Canadians. When the Royal Canadian Navy destroyer HMCS Margaree runs afoul of the Soviet and American nuclear submarines responsible for transporting their respective commando units however, events escalate quickly, driving the world to the brink of nuclear disaster. Like the Prime Minister, HMCS Margaree's captain must think quickly to avert disaster.

High above the drama being played out on the ocean's surface, RCAF 416 Squadron CF-101 Voodoo's from Royal Canadian Air Force Station Chatham are defending Canadian airspace, directed to their targets by the men and women manning the Pinetree Line radar sites which form the backbone of NORAD's defence systems. 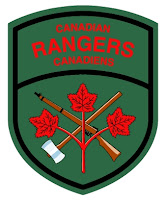 With tensions running high, Canada’s Prime Minister ignores his advisers and orders a contingent of Canadian Rangers, accompanied by a regular army sergeant, to attack the Soviets. He knows his generals think him foolhardy, but he is also aware that one Canadian Ranger in particular could effect the outcome. Conflicts arise above and below the ocean's s
urface as HMCS Margaree takes on submarines from two nations. In the air, 416 Squadron Voodoos carry nuclear weapons on an interception which could explode into WW-III.  The action moves quickly and putting this book down will not be easy.

Seated in the comparatively spacious cockpit of his aircraft and holding formation low on the SR-71 Blackbird’s starboard side, Squadron Leader Benjamin Jones, RCAF, grinned broadly. He had just pulled over and up from beneath the American spy plane, after giving its cameras a nice overhead shot of the CF-101 Voodoo. Reaching down with his gloved hand to the radio controls on the right console, he switched channels and called over to the US Air Force pilot on the NORAD guard frequency.
“Blackbird niner five zero,” he called, reading the numbers off the tail of the aircraft, “this is Golf November four zero zero, do you copy on guard?”
Damn Canadian jet jocks! Chris fumed silently.

“Golf November four zero zero, this is niner five zero. Copy you on guard. I don’t suppose you avoided my cameras this time?” Chris immediately regretted asking the question, knowing it was just what the guy flying the Voodoo wanted to hear.
“Cameras?” Ben was trying hard to sound innocent. “Oh I’m very sorry sir! I should have known that’s what those square openings in the bottom of your fuselage were for!”
“That’s just swell, Canuck!” Sardoucy pronounced ‘Canuck’ as though it were a swear word.
“Well, you know sir,” Ben continued in a condescending voice. “If you would just file a flight plan with Canadian Air Traffic Control before you take off, this wouldn’t happen and I could be back at my base watching the hockey game.” He knew he was pushing it.
“Yeah, maybe next time!” Chris firewalled the throttles and started a turn that would bring him back to the reciprocal course for another photo run.
Ben watched amazed, as the sleek black aircraft quickly pulled away until it had disappeared into the darkness. Had it been any other type, he would have been tempted to kick in full afterburner and give chase but there was no point. The Blackbird would leave him and his Voodoo standing still.

This story is dedicated to my father, Lloyd C. Little, who instilled in me not only an interest in history, but also a love of reading and an open mind.